Your cart is currently empty. Click here to continue shopping. 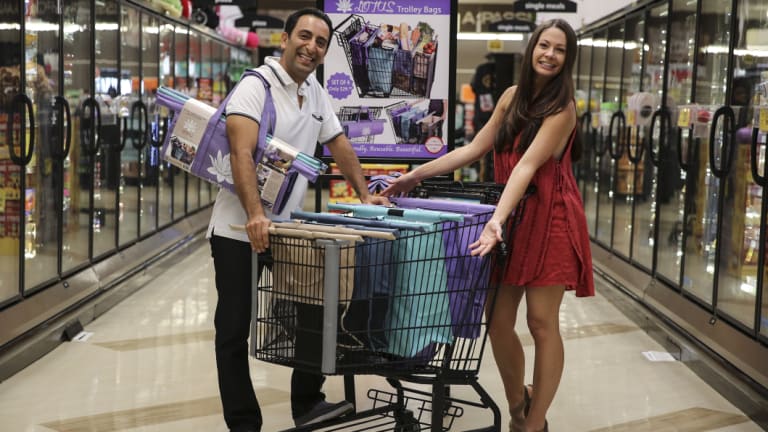 Farzan Dehmoubed and Jennifer Duvall, the husband and wife team behind the Lotus Trolley Bag, which is available to customers in Australia from Sunday, October 14.CREDIT:JAMIE LYTLE


When California banned single-use plastic bags in 2016, Farzan Dehmoubed suddenly had more plastic in his home than ever before.

"The house just became cluttered with the thicker, reusable plastic bags, so the problem just didn't go away at all," he said.

The issue inspired Mr Dehmoubed and his wife Jennifer Duvall to come up with a solution, which is now available to Australian customers for the first time through Kickstarter after a successful launch in the US.

The couple has created the Lotus Trolley Bag, a set of four eco-friendly and reusable bags designed to spread out like an accordion along the top of a trolley, making it easier to pack and carry shopping.

Each machine washable bag can hold more than 30 kilograms, and the set includes an insulated cooler bag, pockets for eggs and wine and reinforced double stitching.

"It's kind of like a filing cabinet for your grocery cart," Mr Dehmoubed said.

"This is more of a system than a set of bags."

Mr Dehmoubed said the product had sold out in the US three times in the past six months, and a flood of international enquiries meant the time was right to expand.

He said "this was not surprising considering Australians used more than 9.7 billion single-use plastic bags each year"- according to a Greenpeace analysis.

The ACT is contributing to the problem, with Commissioner for Sustainability and the Environment Professor Kate Auty warning last month that plastic use was creeping back up to levels that pre-dated the ban on single-use plastic bags introduced in the ACT in 2011.

"We're trying to solve a problem everyone has got and is frustrated with," Mr Dehmoubed said.

"Some of the statistics are alarming, but everybody grocery shops and everybody needs something to carry their groceries in."

Mr Dehmoubed said his bags could be reused hundreds of times, and the set he and his wife had used for more than a year were still in good nick.

The bags are available to Australian customers online from Sunday, and Mr Dehmoubed said he was also in negotiations with Woolworths about making the bags available for sale inside supermarkets. He hoped that might happen early next year.

The Kickstarter campaign aims to raise $14,050 to help launch the Lotus Trolley Bag in Australia, with the bags available at discounted prices for people who back the campaign.

Boston Globe - "A shopping cart system that sorts and saves"

The Lotus Trolley Bag: The Best Way to Grocery Shop

✕
Thanks for contacting us! We'll get back to you as soon as possible. Thanks for subscribing